Welcome to the homepage of E merging Z oonoses I nformation and P riority systems, EZIPs . This website aims to assist Dutch decision makers to establish the priority of emerging zoonoses with respect to public health, as a basis for effective and efficient policy-making on control, prevention and surveillance.

The information presented on this website provides scientific input for decision making by the Dutch Ministry of Public Health, Welfare and Sports and the Ministry of Economic Affairs, Agriculture and Innovation. Other aspects of importance for decision making, such as the effectiveness and efficiency of surveillance and control methods, and risk perception are not taken into account in the present version of the priority setting system.

An emerging zoonosis is defined as a zoonosis that is newly recognised or newly evolved, or that has occurred previously but shows an increase in incidence or expansion in geographic, host, or vector range (Van der Giessen et al, 2010).

Navigating to "Pathogens" leads to the database and clicking "Graph" shows graphically the prioritizing of emerging zoonoses in The Netherlands and gives the opportunity to adjust the settings. 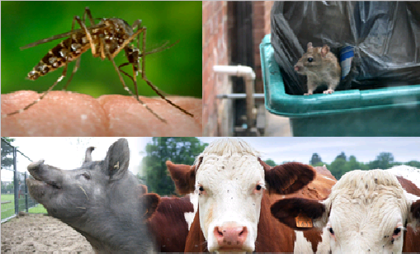 More about this site